The cajón is one of the most emblematic and versatile Peruvian instruments recognized, having a historical tradition dating from the mid-eighteenth century. The rhythms of African descent arrived in Peru through African slaves stripped of their environment by the colonial colony (most of Angola and the Congo) that settled in the North Coast, Central Coast (Lima) and South Coast of the country (Chincha , El Carmen, Cañete). One of these rhythms is the zapateo, classic in the community of this area already mentioned. The prohibition of the drums made the slaves look for other alternatives, using various instruments such as tables, chairs, boxes or any other wooden device that they could beat with their hands, such as drawers of fruit and other foods that they could find in the ports, mainly in El Callao. And so the first Peruvian cajones as a percussion instrument, were constructed of simple packing boxes to which a board was unlocked to produce a greater vibration in the wood when it was percured. To be returned then to the function for which it was destined daily, it would not be in its beginnings cataloged as a musical instrument. Manuel Ascencio Segura, a costumbrista writer and theatrical author who ingeniously portrayed nineteenth-century Peruvian society, dedicated one of his plays to the traditional Lima party, “Lances de Amancaes”, which was released in July 1862, but written before. In this work, Segura shows the Creole, jaranist and rogue ingenuity of those who used to attend the Pampa de Amancaes, making the zamacueca dance and also mentioning the cajón in his work, for what could be considered as a historical reference of the fame of the cajón for those years.

Due to its richness and frequency of use, its adaptability, functionality, construction techniques, the place it was able to conquer among Peruvians and above all, the development achieved by musicians in the execution of this instrument, it became Peru’s main percussion instrument. It is remarkable the rhythmic development of the cajón and its diffusion in the music of the coast of Peru. Source of identification for both folk and contemporary music, the cajón became a symbol of identity. The cajón is present in almost every Peruvian genre of marked African roots (landó, festejo, alcatraz, toromata, panalivio, ingá, etc.). It also accompanies the Peruvian waltz, the polka criolla, the one step, the pasodoble, the tondero and the marinera. The (RCA) Victor Talking Machine made recordings of the cajón when they sent their technicians to Lima in 1913. In 1928, more recordings were made, of which those recorded on March 27 were sold, with the address located as “Barraganes 350 , Lima.” 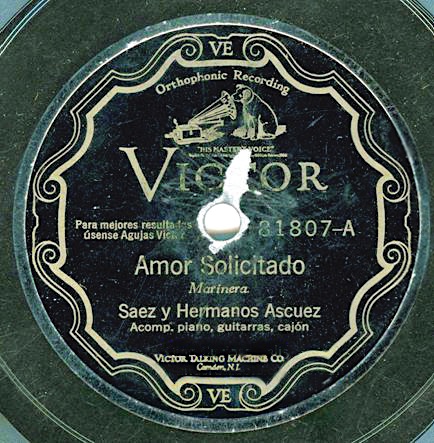 In the 1950s, in Trujillo and Chiclayo, variations were made with the cajón, such as adding strings to increase its brightness or response to treble, although it didn’t have a great reception because some cajoneros of the time considered it “to cheat”. In the 1970’s and 1980’s, although most of the cajones were made of cedar, some covers or front faces were replaced with mahogany (a plywood with mahogany veneer). In the year 2001, it is declared a National Heritage by the National Institute of Culture of Peru. The OAS in 2014 offered a ceremony in recognition of the cajón as an “Instrument of Peru for the Americas.”

Cajón is one of the percussion instruments with greatest penetration power in international music across the world, regardless of the style or genre.